UEFA EURO 2020 Roundup: What caught fans’ attention the most?

With Seedtag’s Contextual AI, we have analysed which Teams, Matches, Players and Coaches have driven the biggest media & fan interest from our Publisher Network

Having taken place a year on from its original date, UEFA EURO 2020 has been held over a month in 12 cities across Europe. There is no doubt that it has been an exciting tournament, filled with a ton of surprises. The biggest one is that Italy was the winning team, even though they were not among the initial favourites. There have been a lot of tense matches, such as France being eliminated by Switzerland and shocking moments like Eriksen’s collapse. It's easy to have missed something. 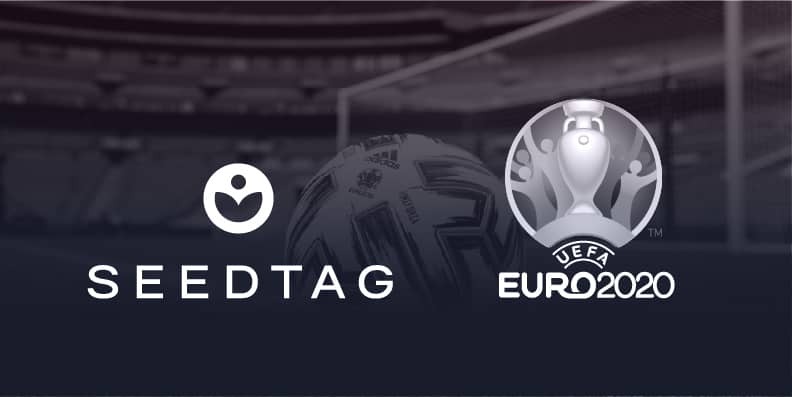 At Seedtag, we’ve identified key matches, teams, players, and managers based on fan interest with the help of our Contextual AI technology and our publishers' sites’ analysis. By measuring Euro article’s traffic (132,666,175 visits in total!!) between June 4th & July 12th, we could understand everything that has happened at a quick glance. Let’s dive into Seedtag’s UEFA EURO 2020 conclusions!

The Euro and World Cups generate excitement even amongst people who are not interested in football. This is partly because of the feeling of affinity with your country's team, but what makes the difference is the tension and unpredictability of the matches. Some of them that seemed to have been decided beforehand end up with surprising results, others look calm and end up in a tense penalty shoot-out.

A match does not have to be a final or semi-final to be tense and interesting: this Euro has shown us that, with exciting end-to-end action, a match can be very enjoyable regardless of the stage of the tournament. 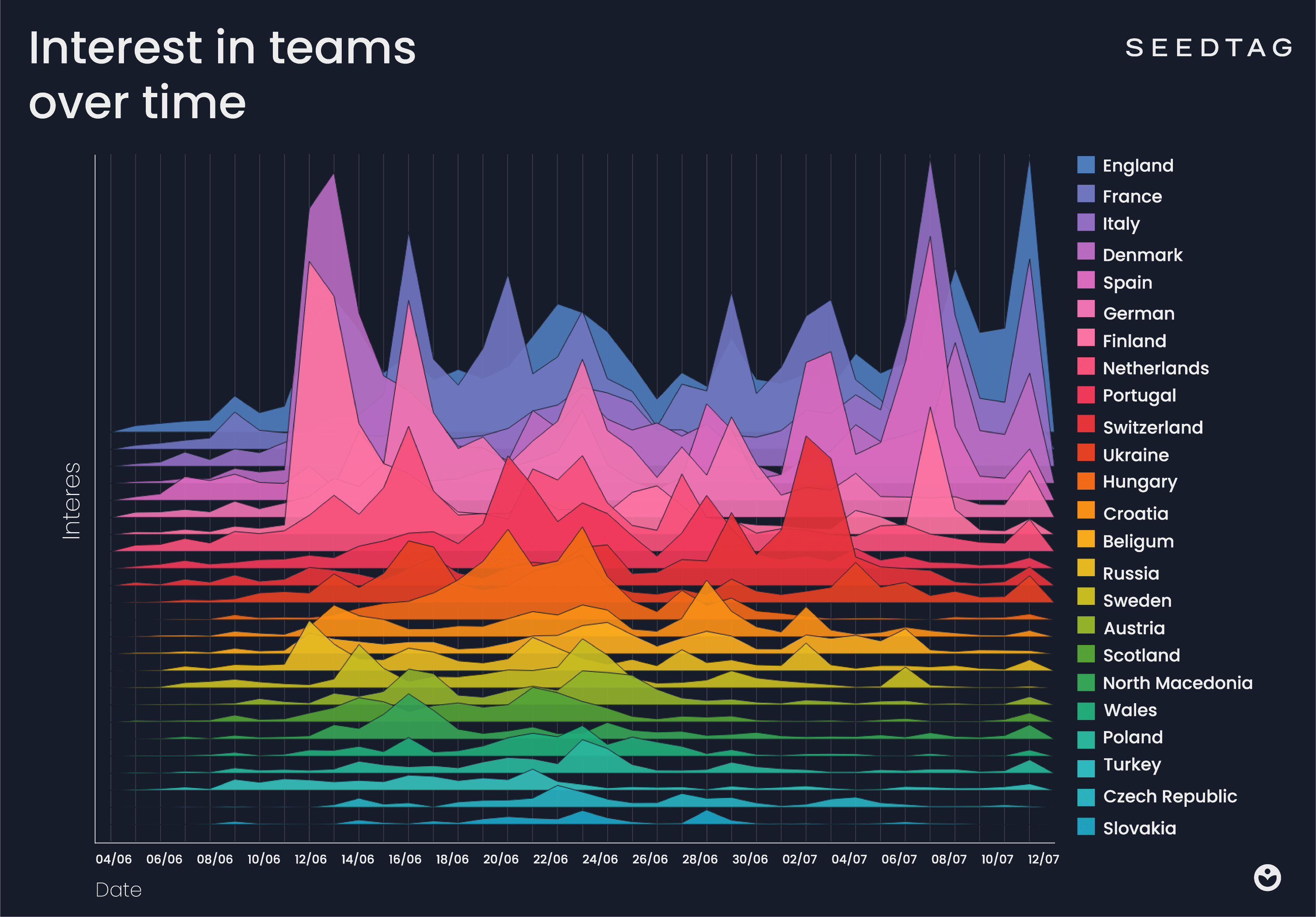 Here you have a compilation of the key matches of this UEFA EURO 2020.

A very tense match in which both teams had a lot at stake after a very good run in the previous phases. This match even surpassed the final in interest due to the big rivalry between two traditionally top teams.

It was to be expected that the final would generate a lot of attention and, in this case, the possibility of England winning their first European Championship further boosted fan interest. This final retained the tense and surprising style of other decisive matches.

Two European football superpowers clashing one against the other, a Greenpeace protest in the middle of the match and some controversial headlines after France's victory were perfect ingredients to provoke one of the most fiery matches of the entire competition.

With Switzerland eliminating one of the favourites, acting as a Giant-killer, this match and its result left fans completely shocked. Undoubtedly one of the most important matches of the European Championship.

What if Switzerland also eliminates Spain? Spanish fans were afraid that the same thing would happen to them as with France, and everyone was eager to see what would happen. The match kept the tension high, and the fans maintained a high level of interest.

In the UEFA Euro 2020 Championship there has been constant change in the position of the favourite teams, with spikes in visits to each team and a tight battle for fan interest. The top teams are not necessarily the ones that went the furthest, but the ones that attracted the most attention from the public. That's why France, for example, didn't even make it to the quarter-finals, but even with that it has gained a lot of exposure. Without further ado, here are the Top 5 teams that have managed to keep fans hyped.

There were high stakes on the Three Lions to win this European Championship. The slogan "It's coming home" has been repeated over and over again, and this has been reflected in the high general interest on this team, especially in the decisive group phase match against Czech Republic. Despite this, they drew their path to the final against Italy, losing the match but winning the media attention battle.

Expectations about the reigning world champions taking the EURO 2020 Cup home were high even before the competition began. Many experts and fans considered France to have the best team, triggering interest in them, which grew even more when they were eliminated by Switzerland. However, after their surprising defeat, its interest remained high due to the intense debate to explain what had happened to the favourites, and the petition to replay the match.

At the beginning of the tournament, the interest in Italy was nothing to write home about, but after coming out really strong from the group stage, the public began to pay attention to them. Then interest started to shift down, but with the semi-final against Spain, the numbers skyrocketed, becoming almost as viral as Eriksen’s incident. Following this victory, they managed to establish themselves as favourites, even facing the Three Lions at Wembley, and emerged victorious in a match that, with that early goal, seemed lost. Congratulations to the winners of UEFA EURO 2020!

Although Spain have collected many trophies in recent years, in this tournament there was not too much expectation placed on them. Criticism about the coach and the level of the players called up meant that attention remained low at the beginning. As the competition was moving forward with great results, interest gradually grew, reaching its peak against Switzerland (quarter-finals) and Italy (semi-finals), two very tense matches.

To say that Denmark were among the favourites before the start of the European Championship would be a lie, but after making it through the group stage, hopes began to rise. Eriksen’s unfortunate incident generated a lot of conversation amongst the audience, far above any other event in the competition. Astonishingly, the Danish team managed to maintain a high level of play, raising the hopes of their fans for victory and the public's interest in them until their defeat against England.

Although unnoticed at first, this team had its moment after eliminating France and facing Spain in the Quarter-Finals. Another example of the surprises that this competition has given us!

This team became trendy, not because of their play but because of the debate associated with the LGBT community (and the flag displayed on the Allianz Arena Stadium) and the discrimination investigation by UEFA.

Many predictions saw Germany as the winner, and expectations were high. Because of their rivalry, the match against France in the group stage was highly followed and their defiance of UEFA rules related to LGBT colours attracted tons of attention. However, with their defeat against England, interest started to fade out.

Nowadays, players are more than just athletes. They are also celebrities, and UEFA EURO is sometimes their chance to represent their country or gain fame for their actions and serves as a chance to showcase themselves. However,  there are also risks involved, because the stakes are high and missing a chance or failing to save a goal can be severely punished by the fans.

In this European Championship, many of the key matches have been decided by tie-breaking penalty kicks, and the players involved in these high-pressure moments have shot to fame, either for leading their team to victory, or for being seen as responsible for their country’s elimination.

These are the players who have garnered the most interest, either by their success or their mistakes.

Just the comments about the press conference and Coca-Cola would be enough to place Cristiano as the most viral player, but adding his record as the top scorer in the history of the Euro Cup and the Golden Boot puts him even higher.

As one of the key components of France’s trident, Mbappe has a good baseline of visits. But three events have made him trendy: UEFA's investigation of Hungary for racist insults, his miss in the penalty shootout against Switzerland, and doubts about his club future.

As can be seen in the graph, the conversations around Harry Kane have been triggered by the three key matches: against Ukraine (quarter-final), Denmark (semi-final) and Italy (Final), where his leadership and reflections on the matches and different issues related to the competition have attracted a lot of public attention.

Although he has maintained a good level throughout the European Championship, his performance in the final against England and his nomination as the best player of the tournament have boosted his popularity.

It is difficult to be a manager at the European Championship. Every decision will be criticised by thousands of fans who expect them to take their country to the top, and there is no excuse for defeat.

At the European Championship, the weight given to the coach is much greater than at other events: they shoulder the responsibility of selecting players, deciding tactics, and choosing which players will take the penalties. 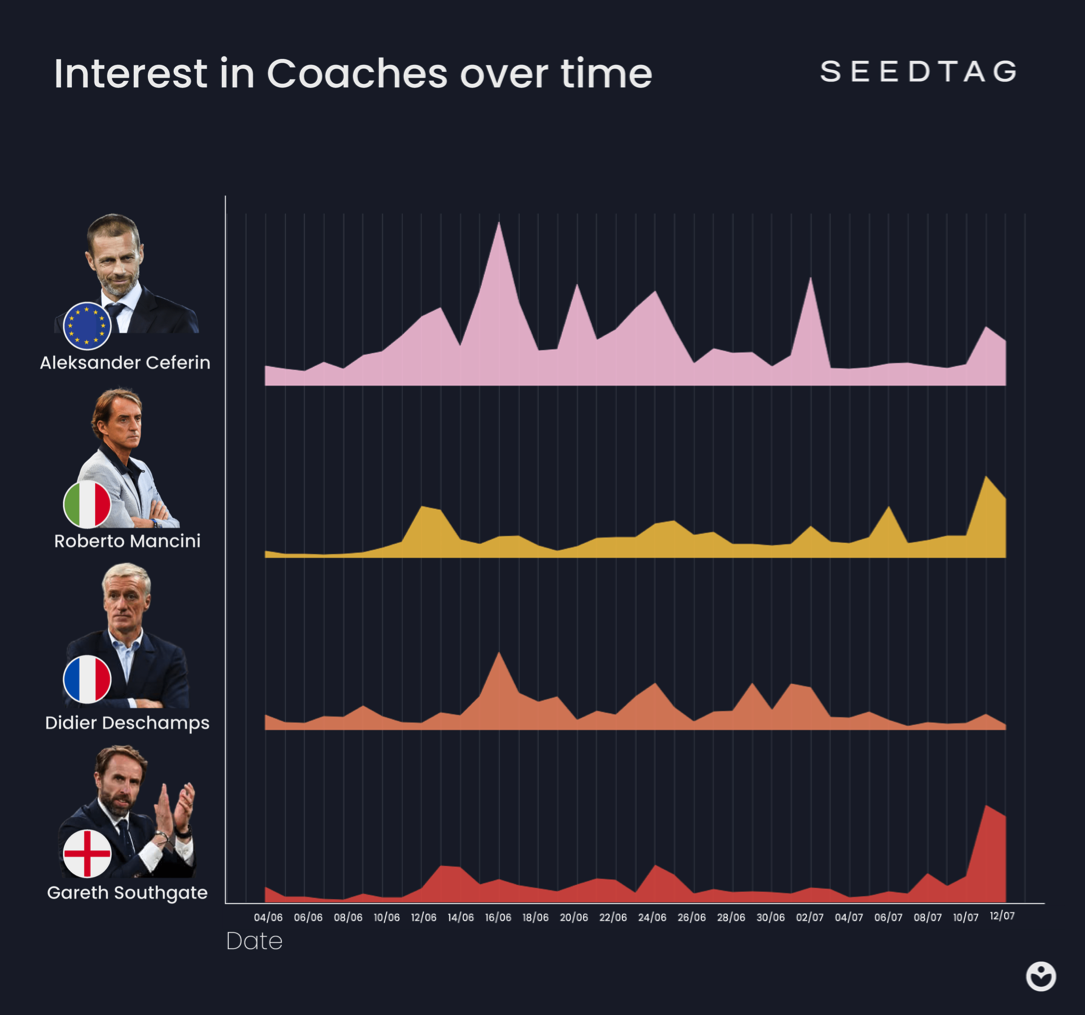 That’s why we wanted to give them their space, and rank UEFA EURO coaches by the interest they’ve generated.

Highly valued for being able to put together a team much bigger than the sum of its players, Mancini was noted for his good management, both at the start of the group stage and at the preparations for the final that gave the victory to the Azzurri.

The French coach was particularly acclaimed after his victory against Germany, combining an aggressive attack with a powerful defense. But, after their defeat against Switzerland, doubts have appeared about whether he is the right man to lead them to the Qatar World Cup.

Although he was also acclaimed for his management in the group stage, Southgate has gone viral because of the final, both for his pre-planning and for the responsibility of the defeat, mainly receiving criticism because of his selection of penalty takers.

As UEFA president, Ceferin has been embroiled in multiple debates and controversies throughout the EURO. The Eriksen incident, the Super League clash and the LGBT flag at the Allianz Arena have led to more debate around this figure than any of the coaches.

This and other data points were used by our advertisers in real time to boost their campaigns and association to the values of sport. In you are interested in knowing more on how contextual data and AI can boost your brand, feel free to contact us.